Autosub6000, the UK’s deepest-diving robot submarine, has successfully completed its first science mission in the deep Atlantic Ocean. The mission formed part of a research expedition investigating potential threats from tsunamis, giant landslides and earthquakes to coastal communities along the west European margin.

Autosub6000 was developed by British engineers and, as its name suggests, can dive to a depth of 6,000 metres - nearly four miles. It is an example of an ‘Autonomous Underwater Vehicle’ (AUV) meaning that it is not controlled from the surface and is pre-programmed before each mission.

For its first scientific mission, Autosub6000 was released from the research vessel RRS James Cook and sent almost three miles below the surface to investigate a submarine canyon north of the Canary Islands. Upon its return to the surface, some 24 hours later, the vehicle provided scientists with spectacular three-dimensional images showing holes in the seafloor the size of a football stadium. These holes were formed by giant submarine flows that ripped up huge volumes of seafloor sediment and carried the material up to 1,000 kilometres further offshore.


Both Autosub6000 and RRS James Cook are operated by the National Marine Facilities Division of the Natural Environment Research Council. The NMFD is based at the National Oceanography Centre, Southampton.

Chief Scientist on RRS James Cook is Dr Russell Wynn, of the National Oceanography Centre, Southampton. Dr Wynn says, “This new technology is allowing us to image the seafloor in unprecedented detail, and is providing valuable information about the huge scale and immense power of these giant submarine flows”.

The robot submarine executed a so-called ‘lawnmower survey’, flying 100 metres above seabed, while surveying the 16-square-kilometre area in 200-metre-wide strips with its high-resolution multibeam echosounder. The leader of the Autosub6000 team is engineer Steve McPhail, also from the National Oceanography Centre, Southampton. Mr McPhail added “We are very happy with the performance of the AUV and the quality of the images it obtained, following its first ever survey of the deep ocean. Autosub6000 is a completely autonomous robot: there are no connecting wires with the ship and no pilot. Once programmed, it dived down to the ocean floor and completed its mission without any further intervention”.

The research team are also sampling seafloor sediments to establish how often landslides occur in different areas of the deep ocean. Dr Wynn says “We have found that giant landslides are actually quite rare around the Canary Islands, with no major activity in the last 15,000 years. However, in the coming days we will start working offshore southwest Iberia, where earthquakes and landslides have been occurring regularly throughout human history”.

Autosub6000’s next mission is off the Portuguese coast, where it will search for submarine evidence of the devastating 1755 Lisbon earthquake. The earthquake killed over 10,000 people, and generated a tsunami that even reached southwest England. Dr Wynn says that a repeat event is geologically possible at any time, but stressed that more data are required before the threat can be accurately assessed: “The Lisbon earthquake was one of Europe’s worst natural disasters, and we hope that new data from the deep ocean will provide information about the potential future threat to coastal communities”.

The research expedition on RRS James Cook started in the Canary Islands on 5 August 2008 and is scheduled to finish in the UK on 3 September 2008. The UK-led research team also involves scientists from Spain, Portugal and Russia. 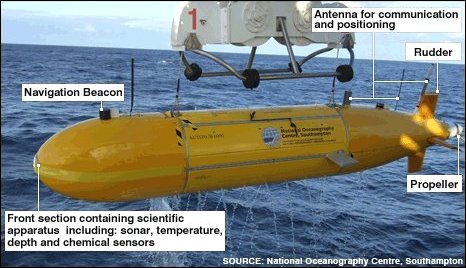 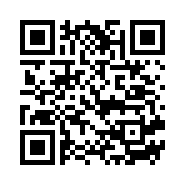