The impact of climate change on ocean acidification and its biological response,

Comments: How should I figure out what to 'start-on' (how to testify these).

The global concentration of the atmospheric greenhouse gas carbon dioxide (CO2) is increasing, primarily due to the combustion of fossil fuels and resource extraction processes (IPCC, 2001).  Approximately 6.5 billion tonnes of CO2 are emitted globally each year (DEFRA, 2006).  Greenhouse gases trap solar radiation in the atmosphere, resulting in global warming. CO2 in particular absorbs radiation with wavelengths between 13 and 19 micrometers (New Scientist, 2006a).  Consequently, global temperature rises of between 1.4℃ and 5.8℃ by the end of the century have been predicted (IPCC, 2001).  The ocean is one of the world’s largest sinks for atmosphere CO2 (Ormerod et al., 1993).

The atmospheric CO2 in the past 2,000 years were stable until the recent 200 years from the industrial revolution (Figure 1). 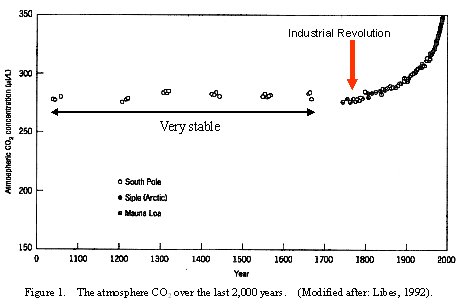 The CO2 is distributed by mixing process and ocean current.  ‘This process is more efficient at higher latitudes as the uptake of CO2 as DIC increases at lower temperature since the solubility of CO2 increases in cold water.’ by MICC (2006).  The biological and solubility pump will both react with the ocean (e.g. temperature, pH) in relate with ocean chemistry.  A simple function is shown below:

3.1  What is ocean acidification?

Ocean acidification is caused by the anthropogenic carbon dioxide from the atmosphere absorbed into the ocean via biological pump.  The increase of CO2 in atmosphere as a result of burning fossil fuels and decreases the ocean pH.  The average surface ocean pH value is about 8.2 but can vary ±0.3 units due to regional and seasonal factor (Figure 2) (Royal Society, 2005). 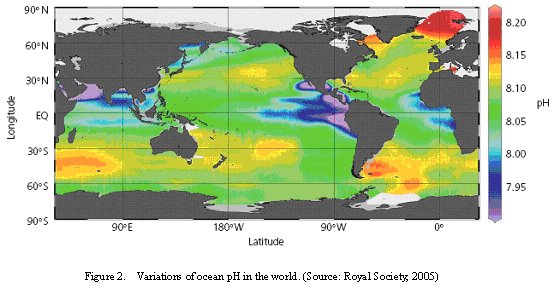 The surface ocean pH value has reduced 0.1 units since the industrial revolution (NERC, 2006).  Model results from the ocean general circulation model and the IPCC’s IS92a scenario have shown the atmospheric CO2 (pCO2) observations from 1975 to 2000 with CO2 emissions and from 2000 to 2100.  The combination of model results with ocean pH and pCO2 suggested pH around year 2300 may reduce to a maximum of 0.7 units where this value may be reduce less than 10% from the processes of changes in temperature or weathering (Figure 3) (Caldeira and Wickett, 2003). 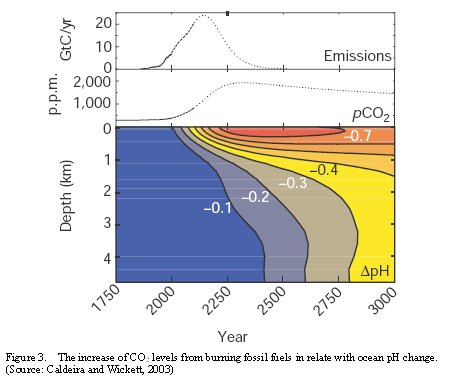 However, simulation based on IPCC Special Report on Emissions Scenarios (SRES) also showed when the atmospheric CO2 at level 450 ppm result in for calcite and aragonite both become unsaturated in the deep ocean (Caldeira and Wickett, 2005); the IPCC SRES suggested the global surface pH may drop 0.3 to 0.5 units at 2100 or reduce from 0.8 to 1.4 units depending on the atmospheric emissions.  It was suggested that ‘by the middle of this century, the estimated reduction in calcification rated may lead to a situation were coral reef areas to erosion than can be rebuilt through new calcification by the organisms’ stated in IOC (2006).  The change in ocean chemistry may have significant affects on marine ecosystems.

The importance of the acid ocean on a biological view may due to the organisms such as calcium carbonate-based phytoplankton; more acid environment may damage their structural (skeletons and shells).  The marine calcification rates will decrease as the ocean becomes more acid and affect the biomass as well as leading to less absorb in carbon dioxide in the future.

3.2  Impact of additional CO2 on the marine organisms

Organisms such as coccolithophorids, foraminifera, coral reef and pteropods are the most common features that build their tissues or shells from calcite carbonate. The coral skeletons and chalk shells will be affected.

The most define character of increase carbon dioxide on calcifying organisms.  Riebesell et al. (2000) showed the coccolithophorids under different CO2 concentrations (Figure 4).  It was found that under high carbonate, coccoliths cells were well developed (Figure 4a-c) whereas under low carbonate, coccoliths grown cells were unable to maintain their shells (Figure 4d-f).  The increase of CO2 was then suggested to ‘slow down the production of calcium carbonate in the surface ocean’ (Riebesell et al., 2000).

A similar finding from Orr et al. (2005) has also supported the impacts on marine planktons where the Southern Ocean will become unsaturated with respect to aragonite.  Figure 5 showed a shell dissolution in a live pteropod (samples were collected from the subarctic Pacific): the whole shell is in Fig. 5a with three extracted sub-figure 5b-5d, 5e is when the shell is not exposed, 5b, the first contact with the changed condition, 5c, recovering the damage, details described in Orr et al. (2005) 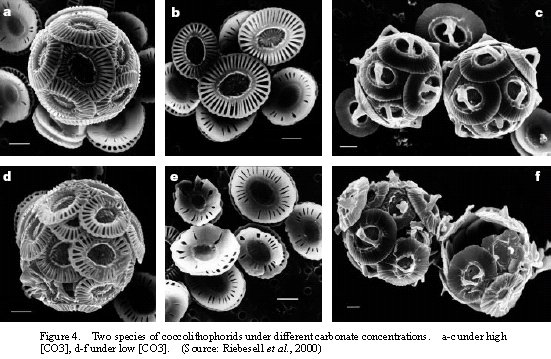 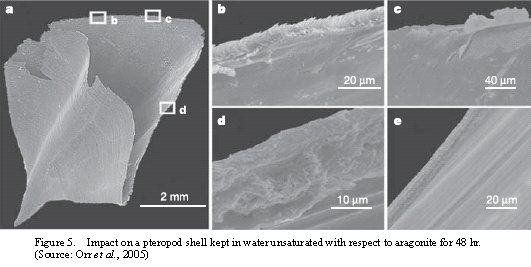 Figure 5.  Impact on a pteropod shell kept in water unsaturated with respect to aragonite for 48 hr.  (Source: Orr et al., 2005)

It has been suggested that if the phytoplankton species could not adapt to the new environment (i.e. unsaturated) fast enough or not survival to fittest, this may immediately affect the predators and the larger ecosystem.  An example of the lack of pteropods may decrease its predator such as herring and North Pacific salmon (Bold and Haldorson, 2003) or other species on fisheries abundance (Hays et al., 2005; Richardson and Schoeman, 2004).  Engel et al. (2005) indicated the changes in carbon dioxide may also directly affect coccoliths cells and its physiology.

However, recent report from the New Scientist (2006b) have proposed although phytoplankton absorb carbon dioxide it was found the amount of absorption was lower than expected.  This unexpected point may due to the produce of ‘pigment-protein complex’ show the same result on the satellite images as to chlorophyll.

The confusion of satellite images on phytoplankton absorbance could be distinguished more carefully in the future in order to diminish the inaccuracy estimation on carbon dioxide in the oceans.

The direct effect on plankton of the increasing CO2 is not well understood yet.  The ecological interactions of ocean acidification are much more complicated than just planktons.  The acidification process does not occur in isolation (Hays et al., 2005).

Ø          What other effects will there be excluding lower pH value?

Ø          Will there be effects on different shell thickness?

The ocean will mitigate the anthropogenic carbon dioxide but not prevent the global warming.  The ocean reacts slowly to the atmospheric and may take decades to have significant response.  The ocean will continues to be an important CO2 sink; greater fractions of emissions will remain in the atmosphere in the future.  Hence, further studies are necessary.

NERC (2006). What are 'acid oceans' and why is acidification important? 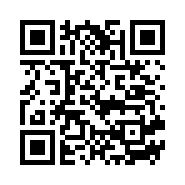