Made in Great Britain 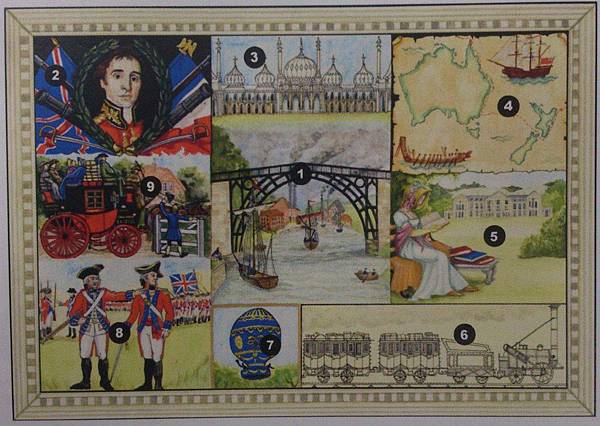 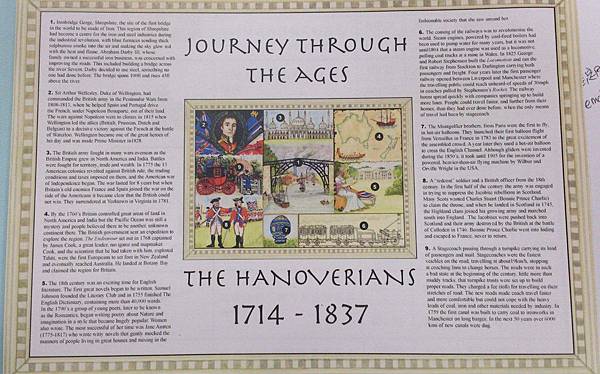 1. Ironbridge Gorge, Shropshire, the site of the first bridge in the world to be made of Iron.  This region of Shropshire had become acentre for the iron and steel industries during the industrial revolution, with blast durnaces sending thick sulphourous smoke into the air and making the sky glow red with the heat and flame.  Abraham Darby III, whose family owned a successful iron business, was concerned with improving the roads.  This included building a bridge across the river Severn.  Darby decided to use steel, something no one had done before.   The bridge spans 100ft and rises 45ft above the river. 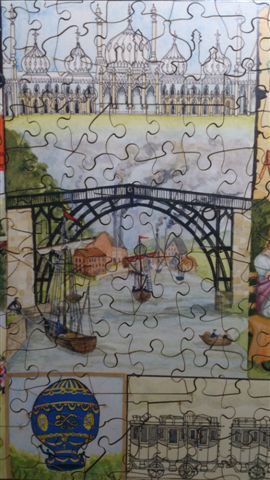 2. Sir Arthur Wellesly, Duke of Wellington, had commaned the British Army in the Peninsular Wars from 1808-1813, when he helped Spain and Portugal drive the French, under Napoleon Bonaparte, out of their land.  The wars against Napoleon were to climax in 1815 when Wellington led the allies (British, Prussian, Dutch and Belgian) to a decisive victory against the French at the battle of Waterloo.  Wellington became one of the great heroes of his day and was made Prime Ministry in 1828. 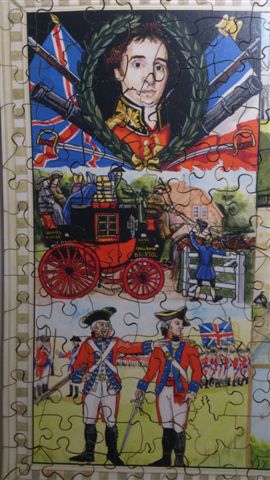 3.The British army fought in many wars overseas as the British Empire grew in North America and India.  Battles were fought for territory, trade and wealth.  In 1775 the 13 American colonies revolted against British rule, the trading conditions and taxes imposed on them, and the American war of Independence began.  The war lasted for 8 years but when Britain's old enemies France and Spain joined the war on the side of the Americans it became clear that British could not win.  They surrendered at Yorktown in Verginia 1781.

4. By tge 1760's Britain controlled great areas of land in North America and India but the Pacific Ocean was still a mystery andpeople believedthere to be another, unknown continent there.  The British government sent an expedition to explore the region The Endeavour set out in 1768 captained by James Cook, and the scientists that he had taken with him, exploredTahiti, were the first Europeans to set foot in New Zealand and eventually reached Australia.  He landed at Botany Bay and claimed the region for Britain. 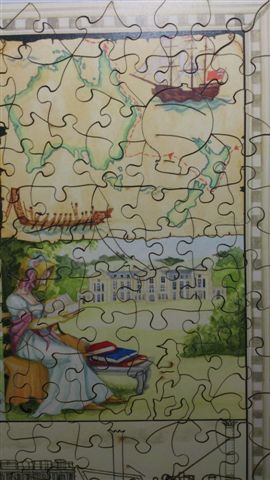 5. The 18th century was an exciting time for English literature.  The first great novals began to be written, Samuel Johnson founded the Literary Club and in 1755 finished The English Dictionary, containing more than 40,000 words.  In the 1790's a group of young poets, later to be known as the Romantics, began writing poetry about Nature and imagination in a style that became hugely popular.  Wolmen also wrote.  The most successful of her time was Jane Austen (1775-1817) who wrote witty novels that gently mocked the manners of people living in great houses and mixing in the fasionable society that she saw around her.

6. The coming of the railway was to revolutionise the world.  Steam engines, powered by coal-fired boilers had been used to pump water for many years, but it was not until 1804 that a steam engine was used as a locomotive-pulling coal trucks at a mine in Whales.  In 1825, George and Roberts Stephenson built the Locomotion and ran the first railway from Stockton to Darington carrying both passengers and freight.  Four years later the first passenger railway opened between Liverpool and Manchester where the travelling public could reach unheard-of speeds of 30mph in coaches pulled by Stephenson's Rocket.  The railway boom spread quickly with companies springing up to build more lines.  People could travel faster, and further from their homes, than they had ever done before, when the only means of travel had been by stagecoach.

7. The Montgolfier brothers, from Paris were the first to fly, in hot-air ballons.  They launched their first ballon flight from Versailles in France in 1783 to the great excitement of assembled crowd.  A year later they used a hot-air ballon to cross the English Channel.  Although gliders were invented during the 1850's, it took until 1903 for the invention of a pwered, heavirer-than-air flying machine by Wilbur and Orville Wright in the USA. 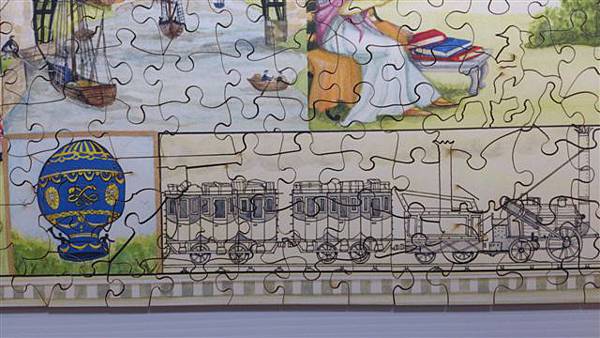 8. A "redcoat" soldier and a British officer from the 18th century.  In the first half of the century the army was engaged in trying to suppress the Jacobite rebellions in Scotland.  Many Scots wanted Charles Stuart (Bonnie Prince Charlie) to claim the throne, and when he landed in Scotland in 1745, the Highlands clans to join his growing army and marched south into England.  The Jacobites were pushed back into Scotland and their army destroyed by the British at the battle of Culloden in 1746.  Bonnie Prince Charlie went into hiding and escaped to France, never to return.

9. A Stagecoach passing through a turnpike carrying its load of passages and mail.  Stagecoarches were the fastest vehichles on the road, travelling at abour 18km/h, stopping at coaches Innes to changes horses.  The road were in such a bad state at the beginning of the century, little more than muddy tracks, that turnpike trusts were set up to build proper roads.  They charged a fee (toll) for travelling on their stetches of the road.  THe new roads made coach travel faster and more comfortable but could not cope with the heavy loads of coal, iron and other materials needed by indystry.  In1759 the first canal was built to carry to ironworks in Manchester on long barges.  In the next 50 years over 6000 kms if bew canals were dug. 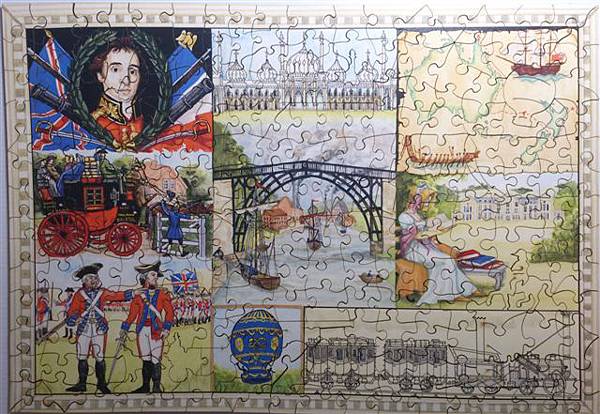 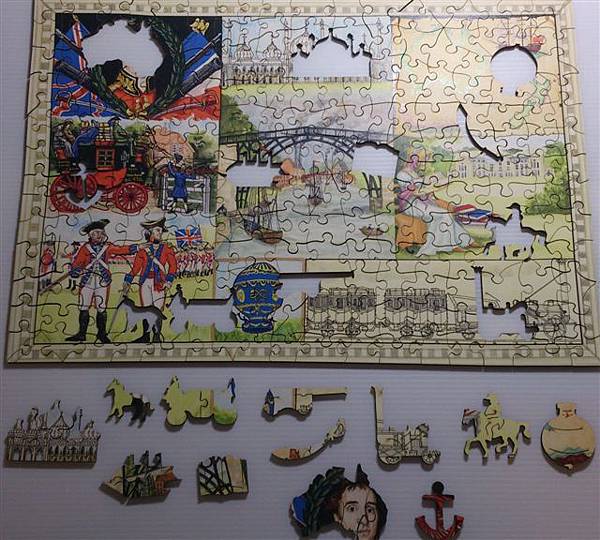 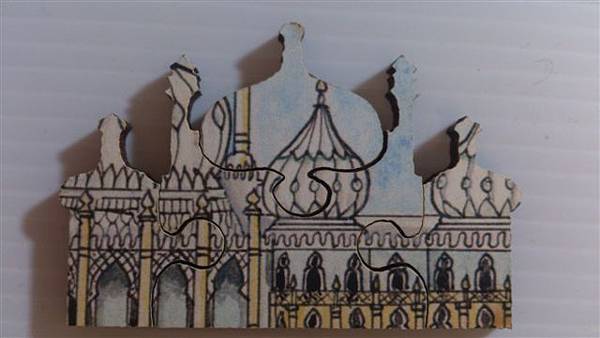 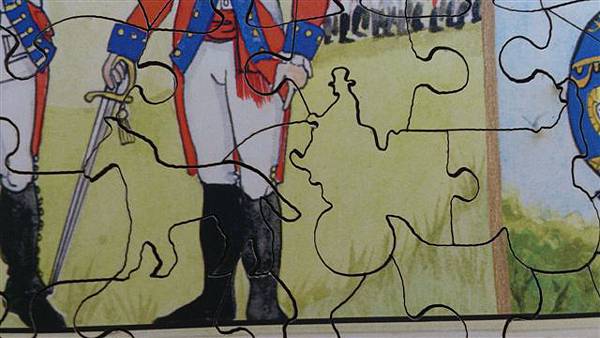 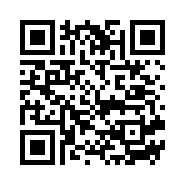